An open, resilient global financial system is required to underpin sustained global economic growth and realise the potential of globalisation, said Mark Carney, Governor of the Bank of Canada. Globalisation has lifted hundreds of millions of people out of poverty and created the potential for hundreds of millions more to follow in their path. “But this transition will not be smooth, and it is not preordained,” the Governor said.

“In many respects, the problems we face today are the product of two flawed monetary unions,” the Governor said. One is the formal European monetary union; the other is the international monetary system, informally known as Bretton Woods II. “In both cases, financial reforms will be integral to the solution,” Governor Carney said in a speech to the Atlantic Institute for Market Studies. “An open, resilient global financial system will be central to the transformation of the global economy,” he said. “In order to achieve that, financial sector reform is a must.”

The Governor stressed that reform of the financial system must take into account its global nature. “It is not enough to have our own house in order unless we seal ourselves off from the world - and if we were to do that we will end up much poorer.”

There are four main components to the global financial reform agenda:

To preserve the advantages of an open and globally integrated financial system, full and consistent implementation of agreed reforms is necessary across the G-20. Recent experience demonstrates that when mutual confidence is lost, the retreat from an open and integrated system can occur rapidly. “A return to a nationally segmented global financial system would reduce both system resilience and financial capacity for investment and growth,” the Governor said.

Governor Carney concluded his speech with comments on Canada’s current economic environment. Despite ongoing global headwinds, he said “the Canadian economy continues to grow with an underlying momentum consistent with the gradual absorption of the remaining small degree of economic slack.” 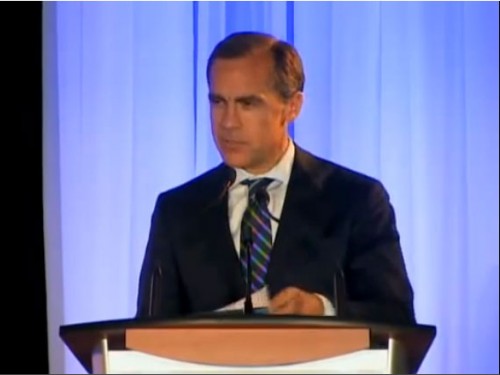 Financing the Global Transition - Mark Carney, the Governor of the Bank of Canada, speaks before the Atlantic Institute for Market Studies.

Financing the Global Transition - Mark Carney, the Governor of the Bank of Canada, speaks before the Atlantic Institute for Market Studies.