In response to the global financial crisis, Canada’s broad economic strategy has been to grow domestic demand and to encourage Canadian businesses to retool and reorient to the new global economy, Bank of Canada Governor Mark Carney said in a speech today. “On the former, we have been successful,” he noted. On the second, he urged greater focus.

“As effective as the reliance on domestic demand in general and household spending in particular has been, the limits of this growth model are becoming clear,” the Governor told business and community leaders in the Kitchener-Waterloo region.

While household spending in Canada has been growing strongly for over a decade, it has become more heavily dependent on stimulative financing conditions and high levels of net worth since the crisis. As a consequence, the debt burden on Canadian households has increased further, and much of the financing for the recent increases in indebtedness has come from abroad. “These trends are unsustainable over the medium term,” the Governor said.

In contrast, Canada’s export performance has been weaker than in prior recoveries. “Exports still have not regained their pre-crisis peak, and in fact remain below their level of a decade ago. Canada has steadily lost global market share throughout this period,” Governor Carney noted.

While competitiveness has played a role, the primary explanation for Canada’s deteriorating export performance is the weakness of our main export markets. “The combination of overexposure to the U.S. market and underexposure to faster-growing emerging markets is almost entirely responsible for Canada’s further loss in world market share over the last several years,” said Governor Carney.

The Governor urged businesses to refocus on developing new markets and new products; retool by investing in plant, equipment and ICT and developing new processes; and retrain by continuing to invest in our greatest resource—our people.

The Governor noted that conditions in the Canadian economy have been somewhat stronger and the degree of slack somewhat smaller than the Bank had expected. While net exports have picked up somewhat, he said their contribution to growth will be limited by a still-weak level of foreign demand and ongoing competitiveness challenges, including the persistent strength of the Canadian dollar.

Exporting in a Post-Crisis World 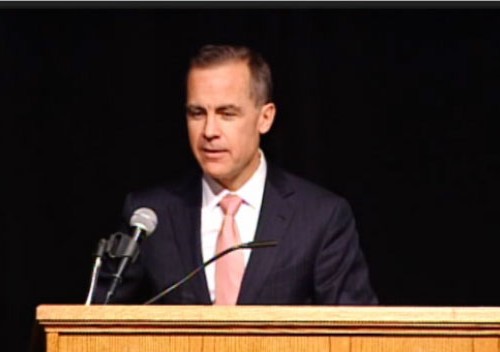