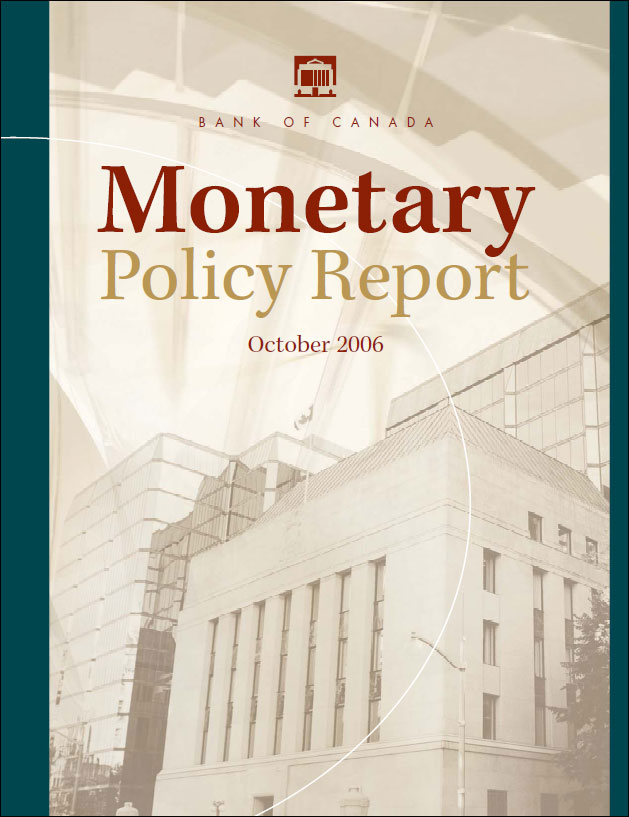 The Canadian economy continues to operate just above its full production capacity, and the near-term outlook for core inflation has moved slightly higher. However, with the U.S. economy slowing more quickly than expected, the base-case projection for Canadian economic growth has been revised down slightly from that in the July Monetary Policy Report Update. Lower energy prices have led to a downward revision of the projection for total consumer price inflation. They have also contributed to moving the Canadian dollar into a somewhat lower trading range.

Although domestic demand in Canada has continued to grow at a robust pace, GDP growth in the second and third quarters of 2006 has been slower than expected, largely because of weaker net exports. A weaker near-term outlook for the U.S. economy has curbed the near-term prospects for Canadian exports and growth. As well, the Bank has lowered its assumption for potential growth to 2.8 per cent for the 2006–08 period, given recent developments in labour productivity. As a result of these factors, the Bank’s base-case projection for Canadian GDP growth has been lowered to 2.8 per cent this year and 2.5 per cent in 2007. But with the U.S. economy projected to recover by the end of 2007, growth should pick up to 2.8 per cent in 2008. Such a profile implies that the small amount of excess demand now in the economy will be eliminated by the second half of 2007 and that the economy will then remain roughly in balance through to the end of the projection period.