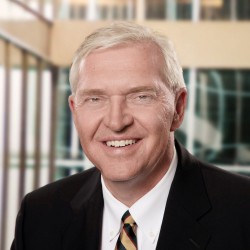 Jeremy Farr was appointed General Counsel and Corporate Secretary of the Bank of Canada in June 2012. In this capacity, he supports the Bank’s Board of Directors and its senior management and acts as the principal liaison between them. Mr. Farr is responsible for all legal matters and provides expertise and direction in corporate governance practices.

Mr. Farr was a partner in the Ottawa office of Borden Ladner Gervais LLP (BLG) prior to his appointment to the Bank of Canada, with a practice in corporate and securities law, including corporate governance and mergers and acquisitions. He was Regional Managing Partner of the Ottawa office and a member of BLG’s National Executive Committee from 2001 to 2005. He was also a member of the firm’s National Council from 2000 to 2005, and served as its Chairman in 2004 and 2005.

Mr. Farr is a member of the Law Society of Ontario, the County of Carleton Law Association and the Canadian Bar Association. Mr. Farr maintains the designations ICD.D from the Institute of Corporate Directors and CIC.C (Certified In-House Counsel – Canada) from the Canadian Corporate Counsel Association.  He has served on the Advisory Board for the Sprott School of Business at Carleton University, the Executive Committee of the Ottawa Chapter of the Institute of Corporate Directors, Chair and a member of the Board of Directors for the National Capital Region YMCA-YWCA, and as President and a member of the Board of Directors of the Royal Ottawa Golf Club.