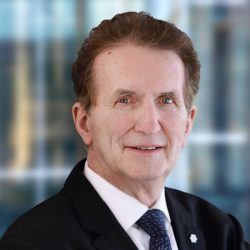 Dr. Robert M. Campbell was appointed to the Bank of Canada’s Board of Directors in June 2018.

Born in Montréal, Quebec, Robert M. Campbell was educated at Trent University, the University of Toronto and the London School of Economics, where he earned his doctorate in political science and economics.

He taught political science and public policy at Trent for two decades, receiving the Symons Award for Excellence in Teaching in 1994 and becoming provost and dean of arts and science. He then moved to Wilfrid Laurier University as its first dean of arts. Most recently, he served for 12 years as Mount Allison University’s 14th president and vice-chancellor.

Throughout his career, Dr. Campbell has also maintained an active research program on Canadian politics and postal systems. He is the author of nine books on Canadian political economy and public policy, most recently postal policy (The Politics of Postal Policy and The Politics of Postal Transformation). He has been an editor and chair of the board of the Journal of Canadian Studies. He is an international expert and consultant on postal matters and carried out a strategic review of Canada Post for the federal government in 2008.

In 2016, Dr. Campbell was made a member of the Order of Canada for his contributions to academia as an authority on postal services and as president of Mount Allison University. Having been named a Top 50 CEO by Atlantic Business Magazine five times, Dr. Campbell was inducted into their Hall of Fame that year.