The Bank of Canada today maintained its target for the overnight rate at ¼ percent, which the Bank considers its effective lower bound. The Bank Rate is correspondingly ½ percent and the deposit rate is ¼ percent. The Bank also announced new measures to provide additional support to Canada’s financial system.

The necessary efforts to contain the COVID-19 pandemic have caused a sudden and deep contraction in economic activity and employment worldwide. In financial markets, this has driven a flight to safety and a sharp repricing of a wide range of assets. It has also pushed down prices for commodities, especially oil. In this environment, the Canadian dollar has depreciated since January, although by less than many other currencies. The sudden halt in global activity will be followed by regional recoveries at different times, depending on the duration and severity of the outbreak in each region. This means that the global economic recovery, when it comes, could be protracted and uneven.

The Canadian economy was in a solid position ahead of the COVID-19 outbreak, but has since been hit by widespread shutdowns and lower oil prices. One early measure of the extent of the damage was an unprecedented drop in employment in March, with more than one million jobs lost across Canada. Many more workers reported shorter hours, and by early April some six million Canadians had applied for the Canada Emergency Response Benefit.

The outlook is too uncertain at this point to provide a complete forecast. However, Bank analysis of alternative scenarios suggests the level of real activity was down 1-3 percent in the first quarter of 2020, and will be 15-30 percent lower in the second quarter than in fourth-quarter 2019. CPI inflation is expected to be close to 0 percent in the second quarter of 2020. This is primarily due to the transitory effects of lower gasoline prices.

The pandemic-driven contraction has prompted decisive policy action to support individuals and businesses and to lay the foundation for economic recovery once containment measures start to ease. Fiscal programs, designed to expand according to the magnitude of the shock, will help individuals and businesses weather this shutdown phase of the pandemic, and support incomes and confidence leading into the recovery. These programs have been complemented by actions taken by other federal agencies and provincial governments.

For its part, the Bank of Canada has taken measures to improve market function so that monetary policy actions have their intended effect on the economy. This helps ensure that households and businesses continue to have access to the credit they need to bridge this difficult time, and that lower interest rates find their way to ultimate borrowers. The Bank has lowered its target for the overnight rate 150 basis points over the last three weeks, to its effective lower bound. It has also conducted lending operations to financial institutions and asset purchases in core funding markets amounting to around $200 billion.

These actions have served to ease market dysfunction and help keep credit channels open, although they remain strained. The next challenge for markets will be managing increased demand for near-term financing by federal and provincial governments, and businesses and households. The situation calls for special actions by the central bank. To this end, the Bank is furthering its efforts with several important steps.

Under its previously-announced program, the Bank will continue to purchase at least $5 billion in Government of Canada securities per week in the secondary market, and will increase the level of purchases as required to maintain proper functioning of the government bond market. Also, the Bank is temporarily increasing the amount of Treasury Bills it acquires at auctions to up to 40 percent, effective immediately.

These measures will work in combination to ease pressure on Canadian borrowers. As containment restrictions are eased and economic activity resumes, fiscal and monetary policy actions will help underpin confidence and stimulate spending by consumers and businesses to restore growth. The Bank’s Governing Council stands ready to adjust the scale or duration of its programs if necessary. All the Bank’s actions are aimed at helping to bridge the current period of containment and create the conditions for a sustainable recovery and achievement of the inflation target over time.

The next scheduled date for announcing the overnight rate target is June 3, 2020. The next full update of the Bank’s outlook for the economy and inflation, including risks to the projection, will be published in the MPR on July 15, 2020. 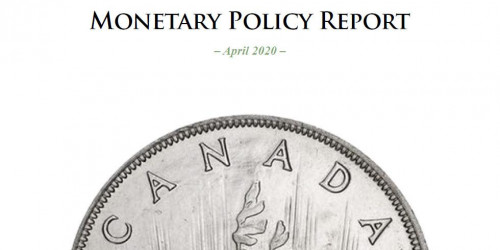