Good morning. Senior Deputy Governor Wilkins and I are pleased to be here to answer your questions about today’s interest rate announcement and our Monetary Policy Report (MPR). Before turning to your questions, let me first offer some insight into Governing Council’s deliberations.

Not surprisingly, the worsening global situation was the primary issue. Economic forecasts have been marked down further in most countries, largely as a consequence of the escalation of trade actions and uncertainty around what may be next. Heightened uncertainty about future trade policies is directly reducing business investment, and there is a risk that this will spread to households as well. These consequences can be buffered through easier monetary policy, and many central banks have recently eased in response. However, we need to remember that tariffs and trade restrictions will work over time to permanently reduce potential output everywhere, while raising the prices of consumer goods—a stagflationary scenario. Monetary policy can only do so much about these elements of the shock.

Canada is not immune to these global developments. In fact, Canada was one of the first countries to feel the effects of trade policy uncertainty, since NAFTA was the first target of the Trump administration. Indeed, this uncertainty has been weighing on investment in Canada for the past three years. These were important headwinds preventing Canadian interest rates from rising by as much as US rates did during 2017–18. Nevertheless, as other economies feel a growing impact from the trade war, there are second-round impacts on Canada through weaker exports and lower commodity prices.

In today’s updated projections, we are forecasting both exports and business investment to contract in the second half of this year and to recover only moderately in the next two years. We can see a wide range of indicators pointing to these effects—in manufacturing, mining and rail transportation—in our Business Outlook Survey and in the quarterly reports of bellwether global companies. While we have had these secondary effects in our forecast for some time, and increased them in our latest projection, these are mostly judgment-based, and the situation could worsen. Accordingly, we present a deeper analysis of this downside risk in today’s MPR, in Box 3. Let me just note that the biggest effect for Canada of a more negative global growth scenario would be a steeper drop in commodity prices and, as in 2015, a significant depreciation of the Canadian dollar.

In contrast to these adverse global developments, the Canadian economy is demonstrating resilience overall. The economy continues to create new jobs at a solid pace, the unemployment rate is near an all-time low, many companies are reporting an acute shortage of skilled workers, and wage growth is picking up noticeably in the past six months or so. The housing sector is clearly on the rebound, having digested the various housing policy changes put into place during 2016–18, and is still being fuelled by relatively high rates of immigration. Consumption spending has held up relatively well on average, supported by the solid labour market and low interest rates, even as the savings rate has been edging higher.

At the same time, energy-producing regions continue to struggle, as the full adjustment to the decline in oil prices back in 2015 is not yet complete, and transportation constraints are making the situation worse. You may recall that back in 2015 we said that the full adjustment would take up to five years—that even with lower interest rates and a lower dollar, as well as fiscal stimulus, the adjustment to such a large shock takes a long time. It is painful for individuals, as it involves extended layoffs and possibly interprovincial migration, which is costly for all concerned.

All this adds up to a complex outlook for Canada, with considerable variation across regions and sectors. The strong labour market points to sources of growth such as information technology and other professional services, tourism, education, health care and financial services. Some of this growth is being offset by negative effects coming through business investment and exports, particularly in manufacturing and the resource sector. On the whole, however, it appears that our economy is still operating close to capacity but probably with a modest amount of excess supply.

Governing Council agreed that, all things considered, this excess supply is probably not pervasive. Furthermore, our situation differs from many other countries in that inflation is at our 2 percent target today and projected to remain very close to target, despite the presence of modest excess supply. However, we acknowledge the downside risks, as set out in our alternative scenario in Box 3.

Governing Council also devoted some time to a discussion of the evolution of financial vulnerabilities in Canada. We have been encouraged by developments since the enhancement of the mortgage stress test, as there has been a significant decline in new mortgages above 450 percent of disposable income. Further, we have not seen evidence of froth in major housing markets for some time now. However, the recent strength in many housing markets across the country is a reminder that we will be carrying high levels of debt for a long time, despite a constructive evolution of vulnerabilities.

It is with this context in mind that Governing Council considered whether the downside risks to the Canadian economy were sufficient at this time to warrant a more accommodative monetary policy as a form of insurance against those risks, and we concluded that they were not. In this setting, we discussed whether such insurance may come at a cost, in the form of higher financial vulnerabilities and possible consequences for the economy and inflation in the future. We agreed that the new mortgage rules in place limit this cost, but the situation will require continuous monitoring. Moreover, the fact that inflation has been on target and is projected to remain near target means that we can weigh the upside and downside risks to inflation more symmetrically.

Governing Council is mindful that the resilience of Canada’s economy will be increasingly tested as trade conflicts and uncertainty persist. In considering the appropriate path for monetary policy, we will be monitoring the extent to which the global slowdown spreads beyond manufacturing and investment. In this context, we will pay close attention to the sources of resilience in the Canadian economy, notably consumer spending and housing activity. We will also be watching for any changes to fiscal policy at the federal level now that the election is behind us. 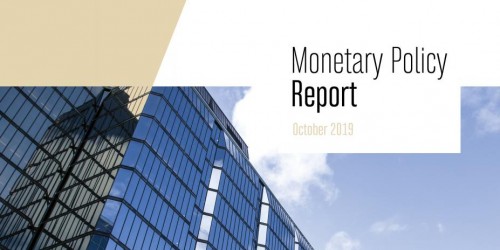 Media Relations Ottawa, Ontario
The Bank of Canada today maintained its target for the overnight rate at 1 ¾ percent. The Bank Rate is correspondingly 2 percent and the deposit rate is 1 ½ percent.
Content Type(s): Press, Press releases
October 30, 2019 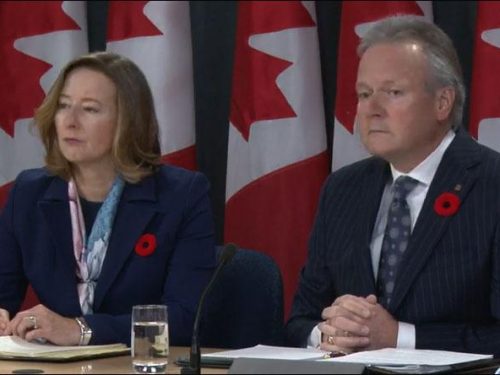