While the labour market in Canada is in good shape overall, answers to some key questions will help provide insight into slower-than-expected wage growth, Senior Deputy Governor Carolyn A. Wilkins said today.

In her remarks to the Toronto Region Board of Trade, Senior Deputy Governor Wilkins addressed three main questions: Is the job market really doing well? Why don’t firms offer higher wages if jobs are tough to fill? And what structural factors could weigh on wage growth going forward?

Wilkins noted the unemployment rate is near the low end of Bank staff’s estimated trend or natural rate of unemployment—essentially the rate that puts neither upward nor downward pressure on inflation. However, since this rate is subject to great uncertainty and evolves over time, the Bank must look at other indicators, such as wage growth.

“Regional and sectoral factors can explain a lot of why wage growth has been tame,” Wilkins said. Wage gains in energy-intensive regions continued to lag behind those in the rest of the country in 2018 because of ongoing adjustments to lower energy prices, she explained. Meanwhile, wage gains in other provinces were closer to what one would expect in a labour market with little slack.

As to why reported labour shortages aren’t pushing wages up more, Wilkins cited a number of ongoing factors. It may be difficult in some cases to find the right person for some jobs, even at a higher salary, because of important skills shortages. Workers may also be reluctant to move to where the jobs are, particularly given challenges such as housing affordability in hot job markets.

Other structural factors, such as technological innovation, the rise of “superstar” firms and the gig economy, may be reducing workers’ bargaining power, she added.

While monetary policy is limited in its ability to influence these factors, Wilkins noted there are opportunites for business practices and public policy to help enhance Canada’s long-term prosperity. After a challenging start to 2019, the Bank sees the economy picking up again in the second quarter—which should lead to a pickup in wage growth.

“Rest assured that the Bank of Canada will do its part to meet our inflation objective,” she said. “Businesses and governments can help build an even more vibrant job market by investing in education and training, encouraging labour mobility, and improving the competitiveness of Canadian companies.”

A Look Under the Hood of Canada’s Job Market 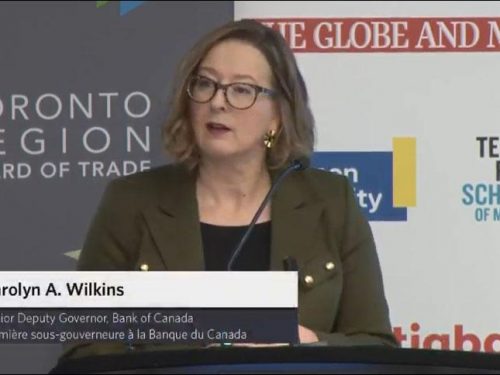 A Look Under the Hood of Canada’s Job Market - Senior Deputy Governor Carolyn A. Wilkins speaks before the Toronto Region Board of Trade. (12:45 (ET) approx.)