The Bank of Canada today maintained its target for the overnight rate at 1 per cent. The Bank Rate is correspondingly 1 1/4 per cent and the deposit rate is 3/4 per cent.

Inflation has picked up in recent months, as anticipated in the Bank’s July Monetary Policy Report (MPR), reflecting stronger economic activity and higher gasoline prices. Measures of core inflation have edged up, in line with a narrowing output gap and the diminishing effects of lower food prices. The Bank projects inflation will rise to 2 per cent in the second half of 2018. This is a little later than anticipated in July because of the recent strength in the Canadian dollar. The Bank is also mindful that global structural factors could be weighing on inflation in Canada and other advanced economies.

The global and Canadian economies are progressing as outlined in the July MPR. Economic activity continues to strengthen and broaden across countries. The Bank still expects global growth to average around 3 1/2 per cent over 2017-19. However, this outlook remains subject to substantial uncertainty about geopolitical developments and fiscal and trade policies, notably the renegotiation of the North American Free Trade Agreement.

Canada’s economic growth in the second quarter was stronger than expected, and was more broad-based across regions and sectors. Growth is expected to moderate to a more sustainable pace in the second half of 2017 and remain close to potential over the next two years, with real GDP expanding at 3.1 per cent in 2017, 2.1 per cent in 2018 and 1.5 per cent in 2019. Exports and business investment are both expected to continue to make a solid contribution to GDP growth. However, projected export growth is slightly slower than before, in part because of a stronger Canadian dollar than assumed in July. Housing and consumption are forecast to slow in light of policy changes affecting housing markets and higher interest rates. Because of high debt levels, household spending is likely more sensitive to interest rates than in the past.

The Bank estimates that the economy is operating close to its potential. However, wage and other data indicate that there is still slack in the labour market. This suggests that there could be room for more economic growth than the Bank is projecting without inflation rising materially above target.

Based on this outlook and the risks and uncertainties identified in today’s MPR, Governing Council judges that the current stance of monetary policy is appropriate. While less monetary policy stimulus will likely be required over time, Governing Council will be cautious in making future adjustments to the policy rate. In particular, the Bank will be guided by incoming data to assess the sensitivity of the economy to interest rates, the evolution of economic capacity, and the dynamics of both wage growth and inflation.

The next scheduled date for announcing the overnight rate target is December 6, 2017. The next full update of the Bank’s outlook for the economy and inflation, including risks to the projection, will be published in the MPR on January 17, 2018. 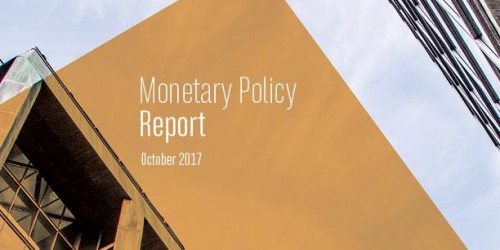 Projections for Canadian economic growth have been increased to 3.1 per cent this year and 2.1 per cent in 2018, with growth of 1.5 per cent forecast for 2019.