Good morning. Senior Deputy Governor Wilkins and I are happy to be here to discuss today’s Financial System Review (FSR). Let me begin with a few remarks about Governing Council’s deliberations.

First, a brief reminder about our methodology. Most of the analysis in the FSR is about vulnerabilities here in Canada. These are pre-existing conditions that may interact with changes in our economic situation to present risks to the financial system. Macroeconomic shocks happen all the time and economies adjust to them. But if significant financial vulnerabilities are present, the effects of those shocks on the economy and on the financial system may be magnified through interactions with the underlying vulnerabilities. The metaphor we have used is that of a large tree with a crack in it—the situation may improve or worsen over time, but there’s no immediate crisis until the wrong sort of storm comes along.

Within this analytical framework, many possible shocks could, in theory, transform financial vulnerabilities into financial stability risks. We offer illustrative risk scenarios in the FSR. Of course, it is possible to draw logical links between almost any macroeconomic shock, anywhere in the world, and financial stability here in Canada, like a “butterfly effect.” We make no attempt to catalogue all of these possibilities, the consequences of which would all look quite similar. Instead, we focus more of our analysis on underlying vulnerabilities in Canada.

That being said, household financial vulnerabilities continue to rise in Canada. We separate these vulnerabilities into two areas, household indebtedness and housing market imbalances. This separation is important, since although they often go hand-in-hand, it is possible that over time one of them will diminish more than the other.

This separation has always been present in our analysis, but Governing Council sought to sharpen the distinction in this FSR. This is because macroprudential measures have been introduced in recent months that will serve primarily to mitigate the potential consequences for the financial system of rising household debt. These measures relate to mortgage qualifying criteria, which will raise the underlying quality of household indebtedness over time, and to financial institutions’ capital requirements and pricing criteria, which will make them more resilient to future shocks.

Accordingly, these policies will help mitigate financial stability risks over time. When it comes to housing activity and prices, the measures will weigh on demand, especially for more expensive houses. But demographic demand remains robust, job creation and income growth have been strong in the greater Vancouver and Toronto areas, and housing supply constraints continue to bind. There is a box in the FSR that describes the macroprudential measures that have been taken and how they might be expected to affect housing fundamentals. The important takeaway is that one cannot judge the effectiveness of these policies simply by observing whether house prices continue to rise. This is because the measures are aimed at mitigating risks to households and to the financial system, not at house prices per se. The effects of these policies will be greatest in Vancouver and Toronto, because that is where the majority of high loan-to-income mortgages are being granted.

In this context, Governing Council noted that price increases have begun to slow noticeably in Vancouver, but it is too early to determine the new trend. It is noteworthy that market activity began to slow before the imposition of the special tax on sales of homes to non-residents, which suggests that other factors may have begun to interrupt the cycle of extrapolative price expectations. However, the situation remains highly uncertain, and we have seen no signs of a similar moderation in the Toronto area. Again, we must emphasize that a moderating housing market, as we have seen in Calgary, for example, may ease financial stability concerns on one front, but leave the level of household debt at a very high level.

Governing Council’s discussions of these risks were also influenced by the backup in global bond yields since the US election. Canada’s bond yields have responded, as is typically the case, albeit in less than a one-for-one fashion. This has led to some increases in Canadian mortgage rates. We will monitor these developments carefully in the months ahead. As we made clear in our recent interest rate announcement, we will continue to follow an independent monetary policy in Canada, one aimed at returning inflation to our 2 per cent target.

Finally, there has been considerable discussion in financial markets about possible shortages of bond market liquidity. Many have pointed to regulatory changes as contributing to this. At the same time, markets functioned exceptionally well following the UK referendum on leaving the European Union and the US election.

This issue continues to draw attention at the international level. In this FSR, we bring some new analysis to the table, which draws upon an in-depth market survey conducted by the Canadian Fixed-Income Forum, an industry group established by the Bank. Governing Council acknowledges that there are pockets where liquidity problems are more evident, such as corporate bonds, off-the-run government bonds and certain repo markets. But we also recognize that markets have yet to fully adapt to the new regulatory requirements. Further, the pre-crisis period may not be the best standard for comparison, because liquidity was excessive and virtually costless at that time. It is reasonable to expect that liquidity will be marginally more costly—and market-making less lucrative—under the new regulatory regime, and that market participants will continue to adapt against the backdrop of a more resilient financial system. We will continue to monitor market behaviour and to engage with market participants, while pursuing work on the impact of regulatory reforms at the international level.

With that, Ms. Wilkins and I will be happy to respond to your questions. 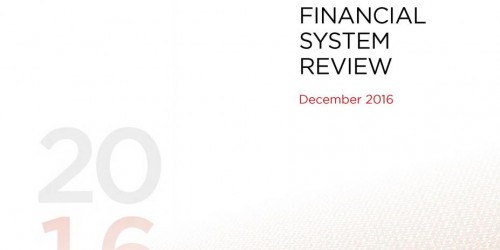 This issue of the Financial System Review reflects the Bank’s judgment that the overall level of risk to Canada’s financial system remains largely unchanged from six months ago. The Bank continues to highlight two key vulnerabilities related to Canadian households: high levels of indebtedness and housing market imbalances. A third ongoing vulnerability is the potential for fragility in fixed-income market liquidity. 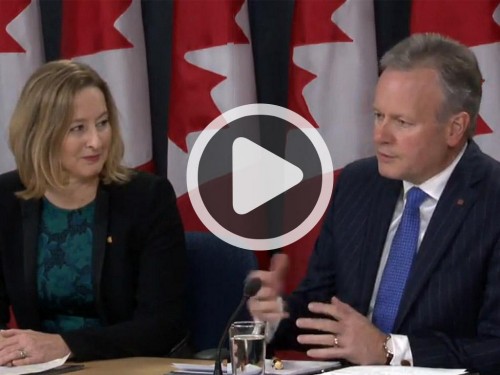