The renewal of the Bank of Canada’s framework for inflation targeting will help Canadian businesses and consumers by providing certainty around their financial plans, Governor Stephen S. Poloz said today.

In a speech to the Business Council of British Columbia, Governor Poloz said the Bank’s inflation-targeting agreement with the federal government, which has been in place for 25 years and which was renewed last week, has helped Canadians spend and invest with more confidence and improved their standard of living.

Governor Poloz recalled the high and variable inflation of the 1970s and 1980s that led to Canada adopting inflation targets in 1991. That inflation took a tremendous toll on the economy, Poloz said, with the uncertainty making it more difficult for businesses to plan and rising prices eroding the purchasing power of Canadians.

The certainty provided by the policy framework has led to stronger economic performance in many dimensions, the Governor noted. Because the government explicitly agrees with the Bank’s goal of low, stable and predictable inflation, the framework is that much more credible and effective, he said.

In its extensive research leading up to the renewal, the Bank looked at a number of issues, including the potential benefits of a higher inflation target, given the experience of the global financial crisis and its aftermath. It concluded that there would be more costs than benefits to raising the target. In addition, the Bank looked at ways of incorporating financial stability risk into the conduct of monetary policy. It concluded that macroprudential policies are best for addressing financial stability concerns, leaving monetary policy to focus primarily on the inflation target. The inflation-targeting agreement with the government means that all economic policies—including monetary, fiscal and macroprudential—can work together in a complementary fashion, said Governor Poloz.

“The renewal of the inflation-targeting agreement sets us up to extend this track record of success for another five years,” the Governor said. “We will continue to observe and learn, ask questions, and make sure our monetary policy is truly doing its best until the next renewal in 2021.” 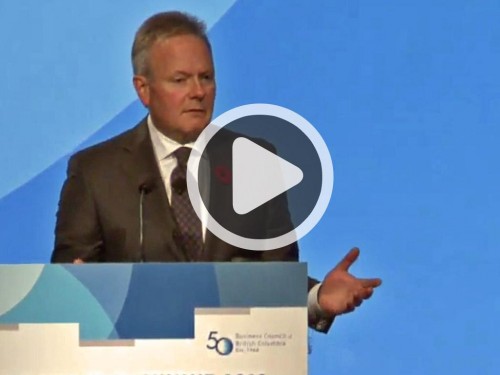 25 Years of Inflation Targets: Certainty for Uncertain Times - Stephen S. Poloz, the Governor of the Bank of Canada, speaks before the Business Council of British Columbia (12:00 (ET) approx.)