The rise of the service sector in the Canadian economy is a natural process that is leading to high-quality jobs and supporting the return of sustained economic growth, Bank of Canada Governor Stephen S. Poloz said today.

In a speech to the C.D. Howe Institute, Governor Poloz said improved technology and productivity have led to new service industries being created. This process of creative destruction, which is happening across advanced economies, means that Canadians are increasingly working in the service sector, while employment by goods producers has fallen even as output in goods industries has continued to expand.

For every job that has been lost in the goods sector since 2001, about 30 jobs have been created in service industries, the Governor noted. Since late 2014, the fastest-growing service industries are those that pay above-average wages, and this has helped the service sector to drive growth in the economy, Governor Poloz said.

Some of the most dynamic industries are in the new economy, Governor Poloz explained, where companies are using information technology to boost productivity and create high-wage, high-skill employment in industries such as artificial intelligence and custom software engineering. A Bank survey of information technology service exporters, one of the fastest-growing segments of the economy, shows that almost all of these companies are recording strong sales growth and most are looking to hire. “This is the kind of creation that follows the destruction,” the Governor said.

The expansion of service industries is particularly important as the Canadian economy recovers from two major shocks—a loss of export capacity in the years before and in the wake of the global financial crisis, and the sudden drop in resource prices in 2014. “Together, these two shocks have created an $80 billion to $90 billion hole in our economy,” Governor Poloz said.

While monetary and fiscal policies are helping the economy recover, the expansion of the service sector will make an increasingly significant contribution to economic growth in coming years. “We are making real progress in filling that hole,” the Governor said. “I strongly believe that the continued expansion of our service sector is pointing the way toward full economic recovery and the return of sustained, natural growth.”

From Hewers of Wood to Hewers of Code: Canada’s Expanding Service Economy 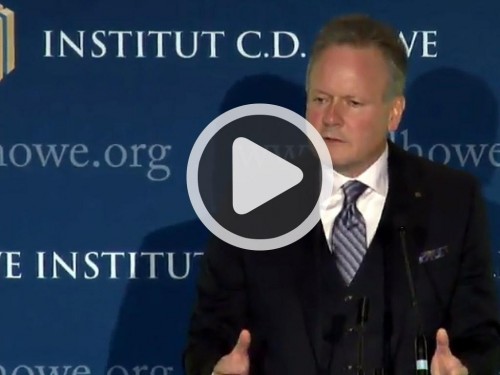 The Role of Services in Canada’s Economy - Stephen S. Poloz, the Governor of the Bank of Canada, delivers the Annual Benefactors’ Lecture, hosted by the C.D. Howe Institute (20:00 (ET) approx.)