Global financial reforms have made the financial system safer, but regulators must ensure that the new rules do not stifle innovation, Bank of Canada Governor Stephen S. Poloz said today in a speech in New York on the future of the financial industry.

“I see such innovation in financial intermediation as essential to fostering regulatory balance between maintaining financial stability on the one hand and facilitating competitive market forces on the other hand,”Governor Poloz told the Economic Club of New York.

Although it is difficult to predict how the financial system will evolve, it is likely that some of the imperfections that exist today will be even more evident under the new regulatory regime.

“It would be surprising if the net effect were not to reduce the availability of credit,” he said, “and those funding gaps will probably be found in all the usual places: lending for young businesses, small- and medium-sized companies, trade finance, and infrastructure.”

The global economy is at a critical juncture. A full recovery from the destruction that took place in the wake of the global financial crisis awaits a resumption of the natural forces of growth - growth fuelled by new product development, new firm creation and expansion, and the addition of new jobs. This rebuilding phase will be less than hoped for without the benefits of innovative financial intermediation.

But competition in finance is like “a force of nature,” he said, speculating on the various ways in which competitive forces might manifest themselves in the new regulatory architecture, including market-based finance, private lending and equity, peer-to-peer finance, innovative public-private-partnership structures, and so on.

While some emphasize the costs associated with new regulation, those costs pale in comparison with the costs of the financial crisis.

“We are still paying for that. Global regulatory reform was absolutely essential.”

With the reforms now in place, the Bank expects that “policies will need to remain stimulative until the legacy headwinds subside and the rebuilding phase truly gets under way.”

The Governor said it will likely be another two years before the Canadian economy returns to steady growth with inflation sustainably on target, but this “simply will not happen without vigorous and innovative financial intermediation. We need to embrace our new regulatory architecture and get on with the job.”

Speculating on the Future of Finance 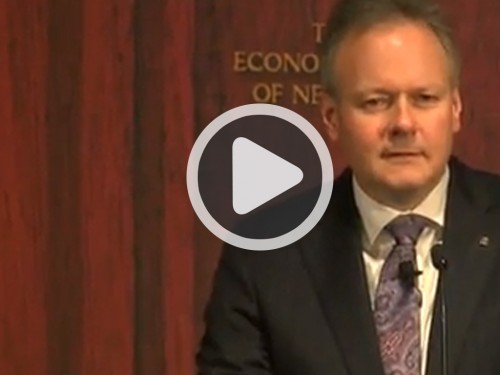 Speculating on the Future of Finance - Stephen S. Poloz, the Governor of the Bank of Canada, speaks before the Economic Club of New York. (8:00 (ET) approx.)

Speculating on the Future of Finance - Stephen S. Poloz, the Governor of the Bank of Canada, speaks before the Economic Club of New York. (09:20 (ET) approx.) 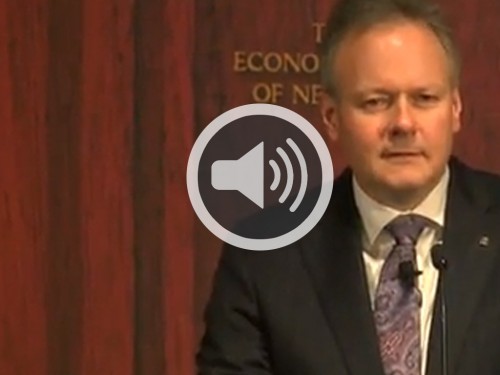 Speculating on the Future of Finance - Stephen S. Poloz, the Governor of the Bank of Canada, speaks before the Economic Club of New York. (8:00 (ET) approx.) and Press conference (09:20 (ET) approx.)