Inflation in Canada is close to the 2 per cent target. Core inflation rose more rapidly than was expected in the Bank’s July Monetary Policy Report (MPR), mainly reflecting unexpected sector-specific factors. Total CPI inflation is evolving broadly as expected, as the pickup in core inflation was largely offset by lower energy prices. Underlying inflationary pressures are muted, given the persistent slack in the economy and the continued effects of competition in the retail sector.

Although the outlook remains for stronger momentum in the global economy in 2015 and 2016, the profile is weaker than in July and growth prospects are diverging across regions. Persistent headwinds continue to buffet most economies and growth remains reliant on exceptional policy stimulus. Against a background of ongoing geopolitical uncertainties and lower confidence, energy prices have declined and there has been a significant correction in global financial markets, resulting in lower government bond yields. Despite weakness elsewhere, the U.S. economy is gaining traction, particularly in sectors that are beneficial to Canada’s export prospects.  The U.S. dollar has strengthened against other major currencies, including the Canadian dollar.

In this context, Canada’s exports have begun to respond. However, business investment remains weak. Meanwhile, the housing market and consumer spending are showing renewed vigour and auto sales have reached record highs, all fuelled by very low borrowing rates. The lower terms of trade will have a tempering effect on income.

Canada’s real GDP growth is projected to average close to 2 1/2 per cent over the next year before slowing gradually to 2 per cent by the end of 2016, roughly the estimated growth rate of potential output. As global headwinds recede, confidence in the sustainability of domestic and global demand should improve and business investment should pick up. Together with a moderation in the growth of household spending, this is expected to gradually return Canada’s economy to a more balanced growth path. As the economy reaches its full capacity in the second half of 2016, both core and total CPI inflation are projected to be about 2 per cent on a sustained basis.

Weighing all of these factors, the Bank judges that the risks to its inflation projection are roughly balanced. Meanwhile, the financial stability risks associated with household imbalances are edging higher. Overall, the balance of risks falls within the zone for which the current stance of monetary policy is appropriate and therefore the target for the overnight rate remains at 1 per cent.

The next scheduled date for announcing the overnight rate target is 3 December 2014. The next full update of the Bank’s outlook for the economy and inflation, including risks to the projection, will be published in the MPR on 21 January 2015. 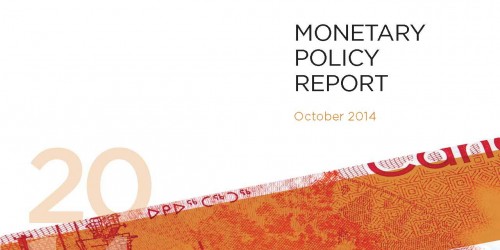 Real GDP growth is projected to average around 2 1/2 per cent over the next year before slowing to around 2 per cent in 2016.