It is a great pleasure to be here in the MaRS Discovery District, where science and innovation meet.

I am here to announce the issue of the new $100 bank note which is available, as of today, in banks across the country.

We are very proud of our innovative polymer bank notes. They are more secure, more economical, and better for the environment than any we have issued previously. These notes are also potent symbols of our rich heritage.

The design of the $100 bank note celebrates Canadian innovation in medical research, including the discovery of insulin to treat diabetes. We are honoured to issue this note on the site where Banting and Best conducted their groundbreaking research almost a century ago.

Many forget that diabetes was once a death sentence. The discovery of insulin changed that.

It was at that desk, Sir Frederick Banting’s desk, where science and innovation met and the lives of hundreds of millions of people changed.

Today’s date is no coincidence. November 14 is World Diabetes Day and the 120th anniversary of Sir Frederick Banting’s birth.

This $100 note is a tribute to Canadian researchers who have left their mark in many areas. Allow me to mention the transformational work of John Hopps, who invented the pacemaker in 1950. He developed this life-saving device at the University of Toronto's Banting Institute, located across the street from here.

This spirit of innovation carries on today and so the note also celebrates the scientists who continue to make our world a better place by improving the lives of many. Here in MaRS, medical professionals are mapping the human genetic code as well as tackling some of the most daunting medical challenges of our time, including cancer and macular degeneration.

These polymer notes don’t just celebrate innovation; they are themselves at the frontier of bank note technology. They were developed by a team of physicists, chemists, engineers and other experts from the Bank of Canada and from across the bank note industry.

There is no other currency like it anywhere in the world. These new notes contain a unique combination of transparency, holography and other sophisticated security elements.

In addition to impressive security features to stay ahead of counterfeiting threats, these bank notes will last longer—at least two-and-a-half times longer than paper—and will therefore be more economical.

These bank notes are also green. Their environmental footprint is smaller than that of the old currency made from cotton-based bank note paper. Once these new notes are removed from circulation, they will be recycled into other products right here in Canada.

Since the new notes were unveiled last June, Bank of Canada staff across the country have been training the millions of cash handlers and tens of thousands of police officers about how to check the security features of the notes. This training, of course, is ongoing. The RCMP continues to be a strong and committed partner in the fight against counterfeiting.

Reports of the death of cash are greatly exaggerated: Our research shows that cash is used for more than half of all shopping transactions. Canadians need a currency they can trust. That is why we are launching today the most secure and advanced note series in the Bank’s history.

In short, these new bank notes are a 21st century innovation in which all Canadians can take pride. We are honoured to launch them here at MaRS, with its links to past glories, current successes, and the promise of future Canadian medical innovation.

Media Relations Ottawa, Ontario
The Bank of Canada today began circulating the new $100 bill – Canada’s first polymer bank note. This new note will be available at financial institutions from coast to coast to coast over the next few weeks. The $100 note features a portrait of Sir Robert Borden, Prime Minister of Canada between 1911 and 1920, […]
Content Type(s): Press, Press releases
November 14, 2011 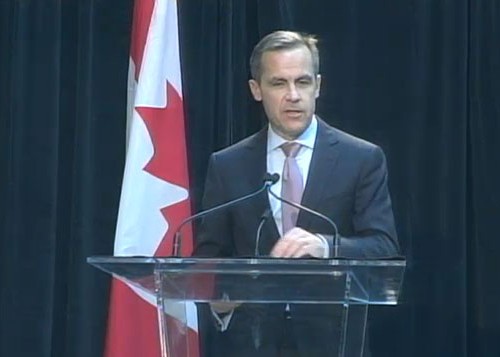