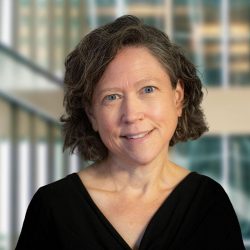 Monique LeBlanc was appointed Regional Director (Currency) at the Bank's Regional Office for the Atlantic provinces in 2005. In this capacity, she ensures delivery of the Bank's currency education program and monitors developments related to currency and its security in the region. In co-operation with private sector partners, she is responsible for overseeing and monitoring the bank note distribution system. She also plays a major role in promoting the Bank and communicating its messages to a variety of external audiences.

Ms. LeBlanc grew up in Margaree Forks, Nova Scotia. She received a Bachelor of Science degree in 1990 from St. Francis Xavier University in Antigonish, Nova Scotia, and a diploma in Actuarial Mathematics in 1991 from Heriot-Watt University in Edinburgh, Scotland.