The Bank of Canada unveiled a new polymer bank note series today at its head office in Ottawa. Information on the polymer material and advanced new security features was released, along with the images and designs of the soon-to-be-issued $100 and $50 bank notes, and the themes for the remaining notes in the series.

Minister Flaherty spoke of the importance of cash as a means of payment in the daily lives of Canadians, adding this is why it is important Canadians see their story reflected in the designs. “These bank notes evoke the country’s spirit of innovation, and their designs celebrate Canada’s achievements at home, around the world and in space,” he said. “Bank notes are cultural touchstones that reflect and celebrate our Canadian experience.”

The $100 note, which is to be issued in November 2011, features images that focus on Canadian innovations in the field of medicine: from pioneering the discovery of insulin to treat diabetes, to the invention of the pacemaker and to the role Canadian researchers have played in mapping the human genetic code. Sir Robert Borden, Prime Minister of Canada between 1911 and 1920, in an updated portrait, remains on the front of the note.

The $50 note, which will be issued in March of 2012, features images of the Canadian Coast Guard Ship Amundsen in the North, reflecting Canada’s leading role in Arctic research. It also evokes the part that Canada’s northern frontier—with its vastness and splendour—has played in shaping our cultural identity. An updated portrait of William Lyon Mackenzie King, the Canadian Prime Minister between 1921 and 1930 and again from 1935 to 1948, is on the front of the note.

The notes will contain a number of unique features that expand the frontiers of bank note security and will make them difficult to counterfeit but easy to check. Most prominent are two transparent areas: the larger area extends from the top to the bottom of the note and contains complex holographic features; the other is in the shape of a maple leaf.

“The Bank’s objective with every new series is to produce a bank note that Canadians can use with the highest confidence,” said Governor Mark Carney. "The Bank is combining innovative technologies from around the world with Canadian ingenuity to create a unique series of bank notes that is more secure, economic and better for the environment."

RCMP Commissioner Elliott stated that, “These new and technically innovative notes will go a long way to deter the threat of counterfeiting in coming years.” He added that the RCMP will “continue to work with the Bank of Canada, and our policing partners, to maintain public confidence in Canada’s currency.”

In the next six months, the Bank will focus on raising public awareness of the coming note series. It will also continue to provide information to the cash-handling industry to help prepare the system for polymer notes, and will work to inform retailers, financial institutions and law enforcement agencies about how to check the new security features once the notes enter circulation.

Starting with the $20 note in 2012, the remaining bank notes in the polymer series will be issued by the end of 2013. The themes of the other denominations will be:

The specific designs and detailed images of these notes will not be released until their official unveiling dates.

More information on the new polymer bank note series can be obtained by contacting Jeremy Harrison, Assistant Director, Public Affairs at 613 782-8782 or 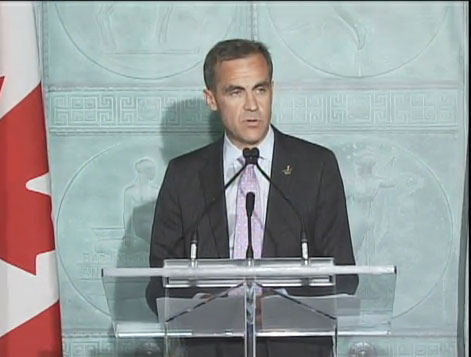 Canada’s New Polymer Bank Notes – Celebrating Canada’s Achievements at the Frontiers of Innovation - The $100 and $50 notes – will be unveiled by the Honourable James M. Flaherty, Minister of Finance; William J. S. Elliott, Commissioner of the Royal Canadian Mounted Police; and Mark J. Carney, Governor of the Bank of Canada.
Content Type(s): Press, Speeches and appearances, Webcasts