The vastness and splendour of Canada’s northern frontier have helped to shape our cultural identity. The icebreaker plays an important role in the North, keeping Canada’s historic passages open, undertaking marine search and rescue, supporting isolated communities, and participating in international environmental research. The CCGS Amundsen helps Canada—the nation with the world’s longest stretch of Arctic coastline—to remain at the leading edge of Arctic research, providing the world’s oceanographers, geologists and ecologists with unparalleled access to the North. 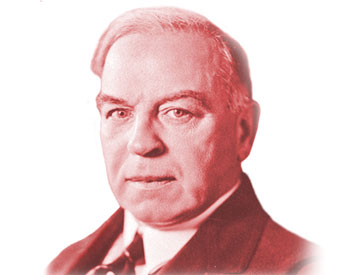 William Lyon Mackenzie King was Canada’s longest serving Prime Minister, whose time in office spanned much of the 1920s, 1930s and 1940s. King presided over some of the most transformative times of Canadian history: independence from the United Kingdom; the Second World War; the introduction of unemployment insurance in 1940 and family allowances in 1944; and active participation in the United Nations and the Commonwealth of Nations. The Canadian Citizenship Act was also introduced under King’s government in 1947. Prior to its introduction, "Canadians" were considered British subjects rather than Canadian citizens. 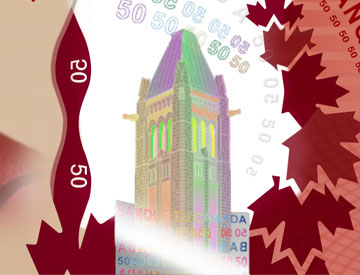 Look at the metallic building. Tilt to see it change colour. Flip to see it on the other side

The reconstruction of the Centre Block of Parliament began almost immediately after the devastating 1916 fire. Architect John Pearson designed it to retain the old Centre Block’s Gothic Revival character while incorporating new structural techniques and materials. For instance, the modern steel frame was covered with the same local sandstone used for the original buildings. Another of Pearson’s elegant solutions is pictured on the $50 bank note. It is one of the four towers that stand along the northern perimeter of Centre Block. Complete with Gothic arched patterns and stone carvings, it and the other towers are in fact ventilation shafts. 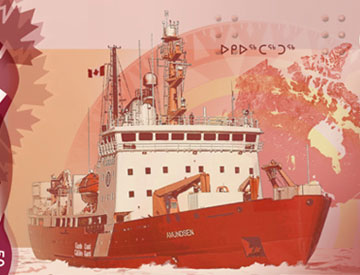 The Canadian Coast Guard Ship Amundsen became a research icebreaker in 2003. Previously, it was known as the CCGS Sir John Franklin. The ageing icebreaker was overhauled in 2002 by a consortium of universities and government agencies and re-launched as the Amundsen–a leading-edge research vessel. Jointly operated by ArcticNet and the Canadian Coast Guard, the Amundsen has the capacity to travel 15,000 nautical miles before returning to port–sometimes staying at sea for over a full year. One of several unique features on this vessel is a ‘moon pool’–a hole at the bottom of the ship that lets scientists deploy instruments such as a remotely operated vehicle to explore the depths of the Arctic Ocean, even while the ship is surrounded by thick sea ice. 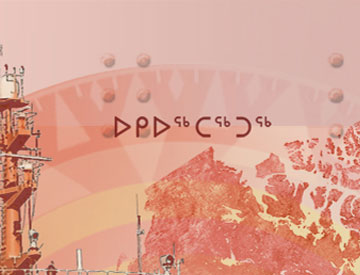 Inuktitut, in its various dialects, is the indigenous language spoken by many of the Inuit peoples of Canada’s Arctic regions. It is identified as an official language in Nunavut and the Northwest Territories. The Inuit Tapiriit Kanatami was the national organization that ensured that the text shown on this bank note is an appropriate translation of “Arctic.” 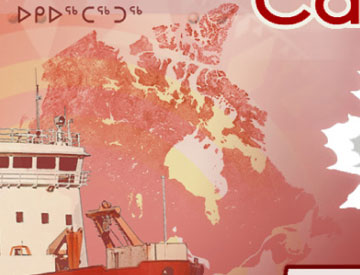 The map of Canada seen on the $50 note was adapted from a map provided by Natural Resources Canada, producers of the Atlas of Canada. The depiction shows the inlets, straits and channels between all of the major islands of the Arctic Archipelago. A largely unexplored landmass, the region’s over 36,000 islands include six of the world’s 30 largest islands. 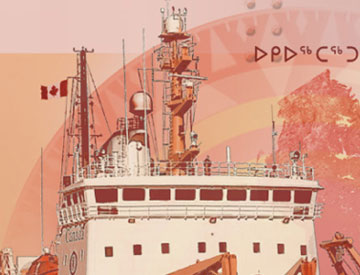 This artistic rendering of a navigation compass symbolizes exploration in the North.

Traditionally, Canadian icebreakers are named after significant people in Canadian Arctic exploration. Roald Amundsen was the first person to cross Canada’s Northwest Passage from 1903-06. The scientific mission of the Amundsen carries forward the intrepid spirit of Roald Amundsen’s first voyages in the Canadian North.

Feel the raised ink on the large number. 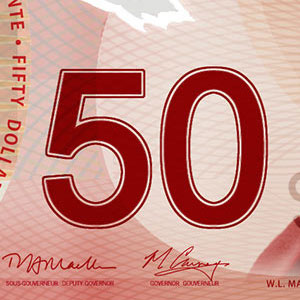 Look at the frosted maple leaf window to see its transparent outline. 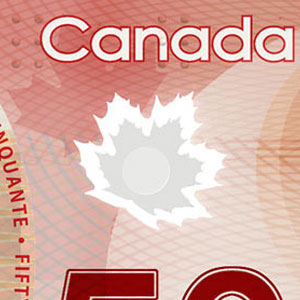 Feel the raised ink on the words "Bank of Canada" and "Banque du Canada." 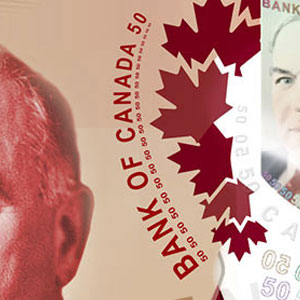 Look at the numbers that match the note’s value and at the word "Canada" that feels slightly raised. 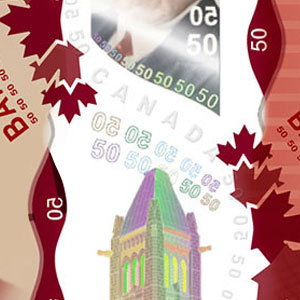 Look at the metallic portrait, it matches the large portrait. Tilt to see it change colour. Flip to see it on the other side. 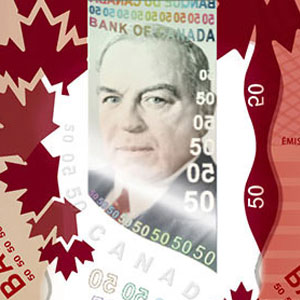 Look for maple leaves that border and cross into the large window. 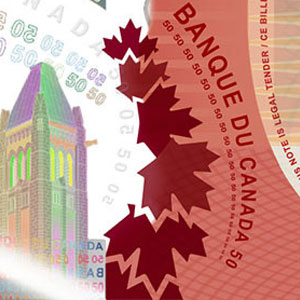