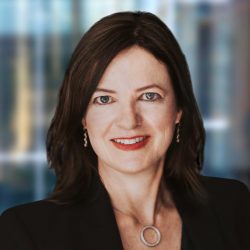 Stephanie Bowman was appointed to the Bank of Canada’s Board of Directors in June 2018.

Born in London, Ontario, Ms. Bowman received a Bachelor of Arts degree with Honours in Business Administration from Western University (Ivey Business School) in 1988 and her Chartered Accountant designation in 1991. She is a Fellow of Chartered Professional Accountants Ontario and a member of the Institute of Corporate Directors.

Ms. Bowman has more than 25 years of experience as a financial services executive, management consultant and board member, leading large teams and projects in Canada, the United States and internationally. She has held various leadership roles with CIBC, Cap Gemini Ernst & Young and most recently Scotiabank, where she was senior vice president of structural cost transformation after working for several years in international banking operations. Throughout her career Ms. Bowman has been a mentor with a particular focus on supporting working women. She was a founding member of Cap Gemini Ernst & Young’s Canadian Women’s Network and has been a speaker at numerous networking events.

She is actively involved in her community and has been a fundraiser for the United Way, the Weekend to End Women’s Cancers, OneWalk and the Terry Fox Run. She was recognized for her commitment to the Kidney Foundation of Canada as a long-term board member and branch president, and received the George deVeber and David Ornstein awards for distinguished service. She has also served as treasurer of Until the Last Child and as a consultant to the board chair of the Women’s Centre of York Region.