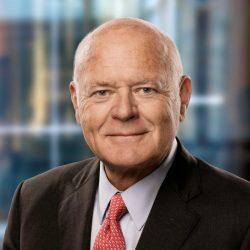 Paul Haggis was appointed to the Bank of Canada’s Board of Directors in September 2018. He resigned from the Board effective February 12, 2021.

Born in Belleville, Ontario, Mr. Haggis is a graduate of Western University and a Chartered Director (C. Dir) of the Directors College through DeGroote Business School at McMaster University.

Mr. Haggis has extensive experience in corporate governance. He is currently Chair of the Alberta Enterprise Corporation, Chair of the Audit Committee of Advantage Energy of Calgary, Director and Audit Chair of Home Capital Group, Director of Sunshine Village Corporation, and advisory board member and limited partner in CAI Capital’s Firethorn Fund and Balfour Pacific. He recently retired as Governance Chair and Special Committee member of Pure Industrial Real Estate Trust.

Mr. Haggis was commissioned into the Royal Canadian Air Force Reserve in 1971 and retired as an Honorary Colonel in 1997. He is a Life Honorary Trustee of the Royal Ontario Museum and a recipient of the Queen's Golden Jubilee Medal.