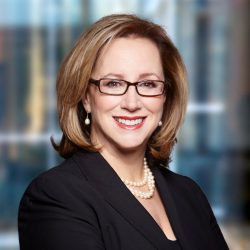 Monique Mercier was appointed to the Bank of Canada’s Board of Directors in September 2018.

Born in Montréal, Quebec, Ms. Mercier is a graduate of the University of Montréal Law School and holds a master's degree in politics from Oxford University, where she was awarded the prestigious Commonwealth Scholarship. She was called to the Quebec Bar in 1983.

Ms. Mercier has been a senior executive in the telecom, health and information technology industry for most of her 34-year career, including two decades at TELUS, where she led a number of corporate functions. She has deep experience in governance, regulatory matters, privacy, crisis and risk management, and mergers and acquisitions in Canada and internationally.

In June 2018, Ms. Mercier received the 2018 Lifetime Achievement Award at the Canadian General Counsel Awards. In 2016, she was honoured as WCT’s (Women in Communications and Technology) Woman of the Year. In 2015, after being named to their Top 100 Most Powerful Women in Canada list for three consecutive years, she was inducted into the Women’s Executive Network Hall of Fame. In 2002, Ms. Mercier was honoured with the Queen Elizabeth II Golden Jubilee Medal.